Kashima City is situated between the Ariake Sea in the east, known for its nearly 6-meter tidal level difference, and the Taradake Mountains in the west. Kashima is known as a brewing town blessed with the rice and clear water necessary to brew sake. There are six sake breweries in the city. One of these breweries, Fukuchiyo Shuzo, which produces “Nabeshima” sake, won the award of “Champion Sake” in the Sake: Daiginjo category in IWC (International Wine Challenge) 2011. Since this award, the popularity of sake brewed in Saga has dramatically increased. Kashima is also known for Yutoku Inari Shrine with a long history and tradition, which marks the 330th anniversary since its foundation.

The origin of Yutoku Inari Shrine, known as one of the Three Greatest Inari Shrines in Japan, goes back to 1662, when a princess called Kazan-in Manko-hime, the bride of Naotomo Nabeshima, the Lord of Kashima Domain, Hizen Province enshrined the divided spirit of Inari-Okami received from her father. In 1687, a shrine was built at the current location at the expense of Kashima Domain, Hizen Province. More than three million people visit this shrine every year to pray for success in business, family prosperity, successful fishing, safe traveling, and happy marriage.

Following the road signs, you will reach the parking lot of Yutoku Inari Shrine. There you will find yourself in front of a majestic, 18-meter-high, vermillion-colored hall surrounded by mountains. You will be awed by the beautiful contrast between the vermillion hall and green trees.

Filming locations are not the only things attracting foreign visitors. People who know this shrine as a filming location for their favorite movie/drama repeatedly visit here, because of the hospitality of people of this shrine, which you cannot find anywhere else. Mr. Tomohisa Nabeshima, the assistant priest of Yutoku Inari Shrine is full of great ideas, and put them into practice: “I thought it is important to know what foreign visitors want, and asked them what they need to make their travel experience more memorable. We have established a Wi-Fi hotspot as many other sightseeing attractions have. We also produced scented charms and fortune strips written in foreign languages.” What lies behind his great ideas is his hospitality. Many signs are also written in several languages such as Thai, English, and Chinese, to make visitors’ travel experience more comfortable.

Sawasdeeclap! Guidance in Thai and the Shrine Seal Stamp are Popular

The average time spent at the shrine is 1–2 hours. Sometimes the assistant priest himself leads the guided tour to show the visitors around the shrine. His guidance partly in Thai is popular among visitors. The visitors collecting shrine seal stamps are moved by how precisely the stamps are affixed, recording a video of the scene. For visitors from Thailand, tasting omiki (divine sake) offered to the god is a memorable experience. Recently more foreign people visit the shrine not only to experience a tourist attraction, but to participate in a ceremony or to request a prayer. 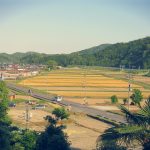 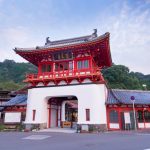