In early October the weather has suddenly become cooler, although it was still hot and humid late last month. The daily high has dropped to 20 degrees centigrade, down from 30, and cold winds have started blowing hard. Autumn has come in Saga Prefecture.

In autumn, rice harvesting begins. The color of the rice ears changes from green to golden brown, and brilliant red flowers, called higan-bana (spider lily in English), start to bloom around the rice fields.
Why are spider lilies called higan-bana in Japanese (bana means flower)? It is because this plant is in full bloom with long, thin, and deep red petals at one time around the Autumnal Higan (Equinox) festival, a Buddhist festival in Japan.

I first learned of higan-bana when I was watching a Japanese TV drama. The drama had a scene in which the protagonist began to cross a bridge. The ground beneath his feet was enveloped in a white fog, and there was a red carpet of spider lilies on the other side of the bridge. When he began walking to cross the bridge, he heard someone calling his name. Just as he was beginning to look back, he awoke from his sleep. He recovered from his critical condition.
In Japan, spider lilies are often used as a symbol for something connecting this world and the world after death. They are said to blossom between the world in which we live and the world of death.

The 250 m-high Mt. Eriyama, in the Tenzan mountain range, lies in Ogi City, Saga Prefecture. At the foot of Mt. Eriyama, there are about 600 terraced rice paddies varying in size from small to large. In the area, the Higan Flower Festival is cerebrated every year during the rice harvesting season between late September and early October. Around that time, numerous red spider lily flowers break through the soil and begin to bloom at one time between the terraced rice paddies.

If you have an opportunity to visit Saga Prefecture in the period between late September and early October, please take photos of spider lilies in bloom around the rice fields. I am quite sure that you will be able to take beautiful autumnal photos.

Fireworks by the Sea 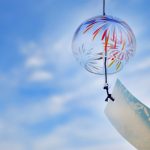 Balloons Flying in the Sky 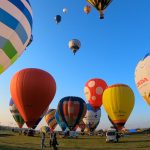