We Thai people eat rice, just as Japanese people do. However, Thai rice is different in variety from Japanese rice. Rice grown in Thailand features long grains, and remains less sticky even after it is cooked. We eat rice by spooning it up from a plate. People in olden times used to eat with their hands.

Meanwhile, Japanese rice features round grains, and becomes very sticky after being cooked. Japanese people eat rice with chopsticks from a rice bowl. Since cooked rice grains are sticky, people can shape them into balls in their hands to eat them as rice balls.

Looking back on my childhood (some decades ago), I remember that Japanese cuisine had not yet spread widely in Thailand. When I saw a manga scene where characters were eating rice balls, they looked very delicious. By that time, I had never seen real Japanese rice balls. But I wanted to eat them, so I tried making rice balls with cooked rice left in the rice cooker at home.

The cooked rice I used then was Thai rice, of course. I tried hard, but was unable to make anything like the rice balls I saw in the manga by any means. I had long wondered what rice balls were like before I found the answer at last. I learned that there are many varieties and kinds of rice, and Thai varieties are different from Japanese varieties although they are both rice.
If someone asks me which rice varieties taste more delicious, I would answer that they are different in their type of deliciousness. Japanese rice tastes excellent when eaten with Japanese dishes, while Thai rice tastes wonderful when eaten with Thai dishes. However, since I first visited Japan, I have sometimes eaten Japanese rice with Thai dishes, and have learned that such a combination also tastes great in its own way.

Soon after I moved to Wakaki, I used to go to a farmer’s store in our neighborhood to buy rice to be cooked at home. The farmer’s store is located in Okusu Park, where a 3,000-year-old camphor tree stands. Rice sold there is called “waterwheel rice,” because its grains are polished by a large spinning waterwheel. Instead of using state-of-the-art machines, long-established, traditional techniques are used to polish the rice.
The rice sold at the farmer’s store really tastes delicious after being cooked. Since the rice grains are polished with the spinning waterwheel in a long time, they don’t turn hot, so their deliciousness is not affected. A kilogram of waterwheel rice is priced at 500 yen, so five kilograms costs 2,500 yen. A signboard at the store says that a variety named Saga-biyori is used for waterwheel rice.

In Japan, many prefectures develop their own original rice varieties through an endless process of improvements. Saga-biyori is Saga Prefecture’s original rice variety produced in 2009. It is unique in that its grains, 5.2 mm long and 2.9 mm wide, are relatively large, and don’t turn pure white after being cooked. It features a sticky, chewy texture, a sweet flavor, and a good aroma. It tastes great even after it has cooled down, not to mention immediately after cooking. This rice variety has been ranked at A level for seven consecutive years.

If you wish to try newly harvested Saga-biyori rice, I recommend buying it after the harvest season in early October. This fall, I cooked new Saga-biyori waterwheel rice and ate it. It tasted excellent. It was soft but chewy. I also made Saga-biyori rice balls in triangular shape, just fitting the size of my hands. When wrapped with nori seaweed grown in Saga, the rice balls become more delicious. Biting crispy nori seaweed, you will find white rice wrapped in the nori sheet. You don’t have to add any seasonings to fully savor this tasty combination. When I feel cold, I eat rice to the fullest. I feel happy just eating it. 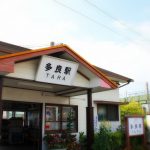 Take a Slow Trip around Ogi, a “Little Kyoto” with Historic Features: Episode 1 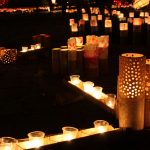