Fireworks by the Sea

The temperature began rising around June this year. And as it continued to get hotter, many Japanese people began asking me if I felt it was hot. When I reply, “Yes, it’s hot”, they usually give me a surprised look and say, “But aren’t you Thai?” Many of them think that Thai people can handle hot weather, so they’re puzzled when a Thai person says they feel it’s hot. I’d like to clarify this misconception. Yes, Thai people may be able to bear the heat, but when the temperature becomes this high, we also feel hot. The news reported of some unbearable temperatures being recorded in July. Reportedly, there was a heat wave covering all of Japan, and the temperature in most areas of the country exceeded 35 degrees. A new record of 41 degrees was set in Kyoto.

This year’s heat wave made it one of the hottest summers in Japan. It seemed like many people had to cancel their plans of going to the beach this summer. With the sun as strong as it is, it wouldn’t take long until people started feeling ill, even if they were in the water. It’s summer, but we can’t even go to the beach to cool down during the daytime. So, what can we still do to enjoy the sea? One option would be to visit the beach in the evening to watch some fireworks.

Apart from enjoying the sea during the day, there’s something else that everyone looks forward to in the Japanese summer season, and that’s the firework festivals. These firework festivals are often held near the beach or by rivers in Japan.
Saga Prefecture faces two seas, both with different features. In front of Karatsu City is the deep Genkai Sea, while Kashima City and the town of Tara face the Ariake Sea, a tideland with a tidal range of six meters during the day. Large firework festivals are held at these two seas of Saga Prefecture. Thousands of spectacular fireworks light up the sky for over an hour.

In my first year after moving to Saga when I still didn’t have a car, there was a firework festival in Karatsu City. We somehow managed to book a hotel and headed to Karatsu City by train. It was raining that night, so we held umbrellas over our heads as we watched the fireworks. The brilliant colors of the fireworks reflected off the clouds. The lights of the fireworks transformed the mood of the sky and the atmosphere surrounding us. There were many people wearing yukatas and hiding under their umbrellas. Delightful shades of red, yellow, light blue, and purple appeared as the fireworks lit everything up. It was as if I had wandered into the world of a surrealist film that I had seen a long time ago.

This summer, I went to see the fireworks in the town of Tara by the coast of the Ariake Sea. Now I have a car, so I booked a hotel, drove there and stayed one night in town. It happened to be a full moon that night, and the sky was absolutely clear with no clouds. It was the perfect condition. Just imagine—a full moon at night, with its glow reflecting on the surface of the sea. Then the colorful firework sparks of yellow, gold, green, and orange also appear. I sat and gazed at the fireworks scattering across the sky and sea for about an hour. Time felt slow and endless while the fireworks shot in the sky. I was dazzled by the absolute beauty of it all. That wonderful moment made me feel as if I was in a dream, watching fireworks by the bay of the Ariake Sea. 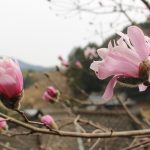 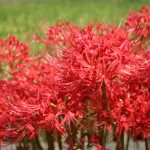