Such a mysterious stone chamber exists here. It is said that the local ruler had it constructed in the early Edo period. However, the true purpose for which this mysterious chamber was made is not known.

Inside the stone chamber, cold air comes out from somewhere. The cold air flowing out of the chamber causes mist in the surrounding area. One theory says that there is a huge ice block underground and cold air created by ground water touching the ice block flows out from the cracks of the ground. In the old days, before refrigerators, people used this “Wind Cave of Nagano” to chill melons and watermelons, as well as to preserve fresh food as a natural refrigerator.

The inside of the Wind Cave of Nagano maintains its regular temperature throughout the year. Especially in summer including number of people, even from outside Saga Prefecture, visit the cave. A ceremony to mark the opening of the mountain to climbers is held in early July every year. Local people welcome all visitors.

You can drive a car up to Nagano Public Hall in front of the mountain course entrance. From there it takes about twenty minutes on foot to the Wind Cave of Nagano. Sometimes a bus takes visitors close to the cave. 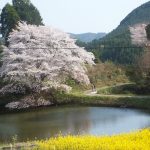 Starting a New Life in Wakaki-cho 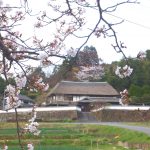